Zoo and Wildlife parks in Munich

Munich's city park, the 18th-century Englischer Garten, borders Schwabing on the east and extends almost to the Isar River. This is one of the largest and most beautiful city parks in Germany. It was the brainchild of Sir Benjamin Thompson, the English scientist who spent most of his life in the service of the Bavarian government. You can wander for hours along the walks and among the trees, flowers, and sunbathers.

Bordering Nymphenburg Park to the north is the Botanischer Garten. The garden is composed of 22 hectares (54 acres) of land, and has more than 15,000 varieties of flora. Each subdivision is devoted to a particular plant variety. The highlight is the Alpine garden, laid out according to geographic region and altitude. It's at its peak during the summer months.

In west Munich, between Schloss Nymphenburg and the main railway line, stands the Hirschgarten. Designated by Elector Karl Theodor as a deer park in 1791, this 27-hectare (67-acre) tract of land is home to one of Munich's most tranquil stretches of greenery. In the 19th century, Münchners would visit the meadow to view the protected game as they grazed. The head huntsman secured the right to sell beer, which prompted the Hirschgarten to soar in popularity.

Hellabrunn Zoo stands in Tierpark Hellabrunn, about 6km (3 3/4 miles) south of the city center, at Tierparkstrasse 30. It's one of the largest zoos in the world, with hundreds of animals roaming in a natural habitat. A walk through the attractive park is recommended even if you're not a zoo buff. There's a big children's zoo, as well as a large aviary. 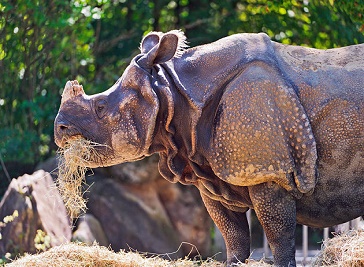 Spread across some 89 acres, Hellabrunn Zoo (Tierpark Hellabrunn) - ranked the fourth best zoo in Europe in 2013 - is one of the most popular attractions in Bavaria. Laid out in 1911, it was the first zoo in the world to have animals grouped according to where they came from. Today, more than 19,000 animals from 757 species are held in open enclosures meant to replicate the conditions of the wild, with animals that normally share habitats kept together wherever possible.
Read More

Wildpark Poing is a great tip if you have children and need a day out. Wildpark Poing was founded in 1959 and lies just outside Munich. At 570.000 square metres in size, it is home to many wild animals that once were common in the German landscape, wolves, elk, deer and more. The deer and red squirrels will feed out of your hand and there are animal stroking areas, and play areas for the children.
Read More